Home Festival Blog What is Garba? Snap, Clap and Twirl 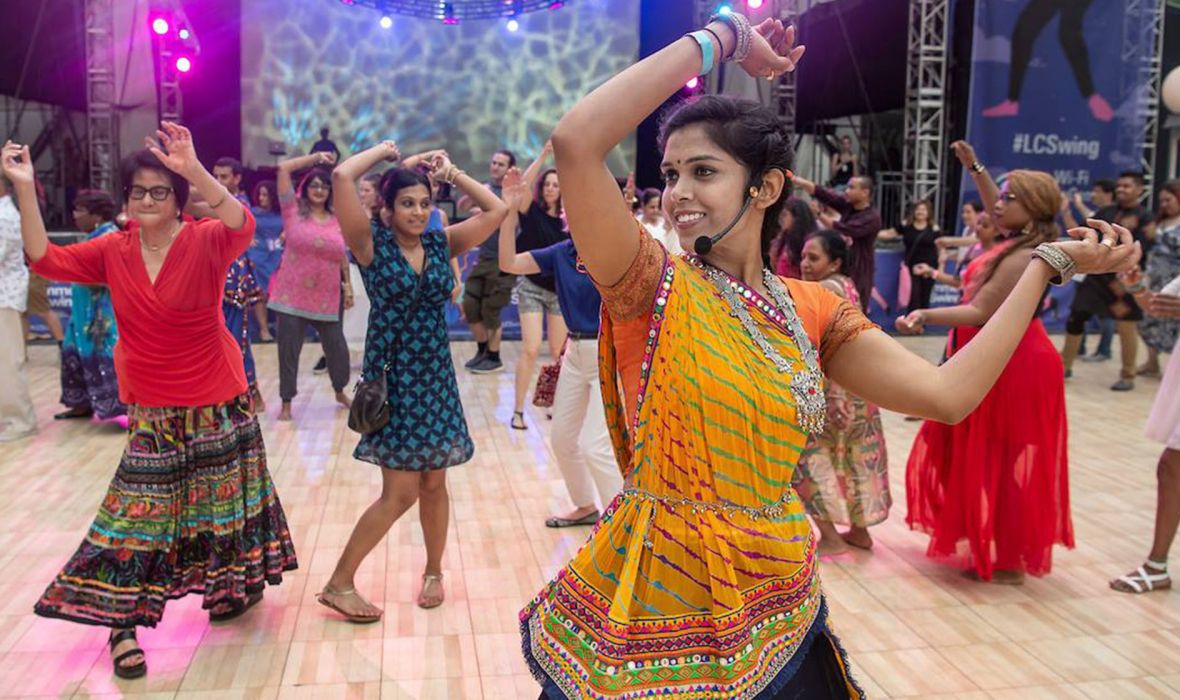 What is Garba? Snap, Clap and Twirl

The guide to garba continues with three more informative tidbits, thanks to the Lincoln Center. Keep reading to learn more about the dance that Garba360 will teach at this year’s festival.

A garba event is comprised of several Gujarat folk dances forms and is often referred to as "raas-garba."
A garba event consists of several segments and Gujarati folk dance forms, including be taali garba (2-clap garba), tran taali garba (3-clap garba), raas, hinch, and more. The two primary forms are garba (both be taali and tran taali) as well as raas. Garba typically consists of snaps and claps to keep the beat of the dance as well as twirls, all done in a circle and performed in Durga's honor.
Raas, or dandiya-raas, is performed with sticks (dandiya) and rotating partners. The dance is associated with two Indian deities: the Goddess Durga and Lord Krishna. The dance itself comes from the staging of a mock-fight and is nicknamed "The Sword Dance," with the dandiya representing Durga's swords. The other influence lies in the partner dance that Lord Krishna performed with milkmaids known as the raas lila.
A typical raas-garba event will have four dance segments—be taali garba, tran taali garba, raas, and a potpourri of Gujarati folk forms. Be taali, tran taali, and raas segments start at a slow tempo, gradually increasing to a fast pace. The last part of the evening features dance forms and steps, both traditional and modern, which can include hinch, sanedo, and Gujarati equivalents to conga lines and the electric slide. During Navratri, garba is performed before aarti (worshipping ritual) as devotional performances in the honor of the Goddess, while raas is performed after it, as a part of merriment. Each of the dances are easy to follow along with and are meant to be performed by people of all ages and dance abilities.

Garba is both meditative and a workout.
Done in concentric circles, surrounded by a community of people, garba is both a personal and group experience. With repetitive movements, the communal experience, and increasing speed, the act of doing garba can become a meditative experience leading to a trancelike state. With a segment of garba lasting anywhere from 30 to 40 minutes and the pace of the movement increasing steadily, garba is also a workout.

Percussion and lyrics make for great music.
Garba music is grounded by strong percussion. Traditional Indian percussion instruments used are dholak, tabla, and dhol. Today, the use of an Octopad is standard instrumentation in a garba music group, while it is also not uncommon to see bongos.
The music for garba and raas is sung in Gujarati. Two common themes of garba and raas songs are homage and prayers to Durga, and themes around Lord Krishna. Ranging from being devotional and philosophical to romantic and playful in nature, the lyrics of garba represent a variety of emotions and ideas, while also being catchy and energetic—after all the music is made for dancing!

We are delighted to have Garba360 come to teach New Haven the steps to garba! Find out when and where the event is happening >