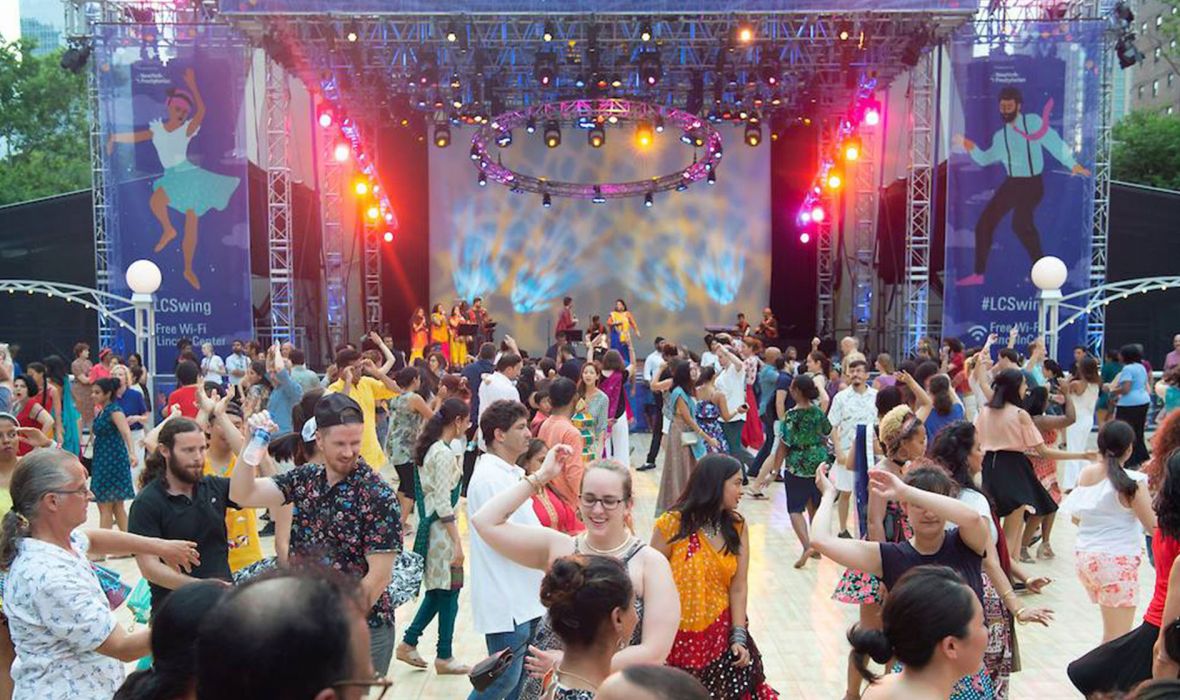 What is Garba? Crossing the Globe, Crossing Generations

Are you ready to learn just how beautiful and how big garba is today? As you read these last three facts as shared by the Lincoln Center, get excited to dance on the Green with Garba360!

Traditional attire for men and women involves flowing "skirts."
The attire worn at garba is vibrant, colorful, and flowy. It allows for freedom of movement, especially in arms and legs, and also spins with the dancers as they clap and twirl. Traditionally, women wear chaniya choli—a traditional Gujarati three-piece outfit comprising choli (a blouse), a chaniya (long flared skirt), and an embellished dupatta (long scarf). Chaniya cholis are paired with glittering bangles, payals (ankle bracelets), necklaces, and belts. Typically, the jewelry is made of oxidized silver, shells, beads, and colorful threads. Men traditionally wear a kediyu and kafni pajama. The kediyu is a long-sleeved top also known as a "gathered frock." It is snug around the chest and flared around the waist and hips, extending above the knees in length. Kafni pajamas are pants with multiple pleats at the waist that balloon outwards when the wearer swirls. Today, it is common to see men wearing kurta (long shirts that extend below the knees) with more fitted bottoms. Both chaniya cholis and kediyu pajamas are elaborately designed. Traditional embellishments include mirrors, elaborate embroidery, and shells.
Heena says: But don't worry if you don't have these—simply dress in loose, comfortable clothing and you'll fit in perfectly at Garba in the Park.

Raas-garba is performed by tens of millions of people globally during Navratri.
In Gujarat during Navratri, the size of garba gatherings can range from less than 100 people dancing together in the common space of an apartment complex or the center of a small village to tens of thousands on several acres of land. As Gujarati migrated around the world, they brought along the community and religious traditions of raas-garba. Today, raas-garba events take place globally outside of Gujarat in community spaces, temples, high school gymnasiums, and even arenas during the festival of Navratri. Collectively, tens of millions of people do raas-garba during the nine-day festival, as well as the weekends before and after.

Raas-garba are not only performed socially, but also competitively.
Beginning in the United States in the 1980s, in an effort to pass on traditions of Gujarati folk dances to the next generation, Gujarati immigrants began organizing Gujarati folk dance competitions. Participants ranging from children to adults compete in various categories based on age and dance styles at the regional and national level. In the early 2000s, first-generation Americans of Gujarati heritage adapted the community competition to create intercollegiate raas-garba competitions. There are now nearly 15 collegiate raas-garba competitions and over 35 collegiate teams nationwide.

We can’t wait to see you on the New Haven Green! Be sure to mark this free event on your calendar >