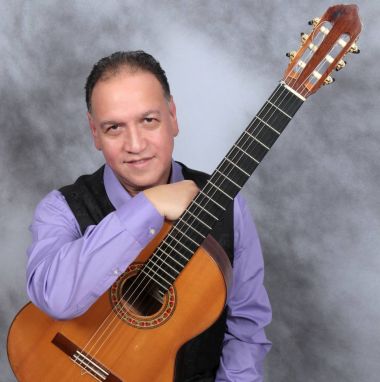 Original Flamenco guitar music featuring traditional Flamenco forms such as Sevillanas, Farruca, Malagueña, Danza Mora, Soleares, and Bulerias. Performance will consist of four such musical pieces. Portable sound amplification provided by the musician. Flamenco music originates in the province of Andalusia in the south of Spain and many of its forms date back to the 18th century.

International Flamenco guitarist with over 35 years of concert, touring, recording and teaching experience. Val has performed at all major Connecticut music festivals as well as in Spain and Puerto Rico. He has recorded 3 independent CD of original compositions. Although he normally performs with his group--Val Ramos Flamenco Ensemble--he has also performed as a soloist for the Connecticut Guitar Society, Center for Music Performance at NYU, Bushnell Performing Arts Center, Iron Horse, and Yale University, to name a few, and at numerous venues in New England.