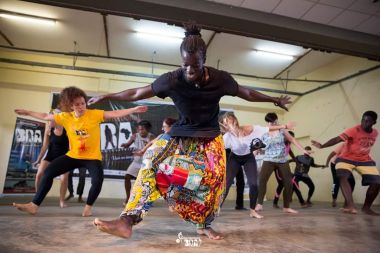 The Sabar dance class is an introduction to Sabar technique, rhythm, and culture of Senegal, based on the deep history of the Kaolack region. Participants will learn important basic fundamentals of Sabar before going in depth. The 1 hour class consists of 40 minutes of the foundation of Sabar and 20 minutes of combinations using experimental Sabar movements from the Bara Mbaye Rhythm. Join us to share in the rich culture of Senegal.

Baidy Ba is a Senagalese dancer, choreographer, and performer, native of Kaolack City, who started dancing from an early age. From 2012 - 2018, Baidy trained in contemporary, classical dance, Afro contemporary dance, and popping and locking with several major artists and pioneers of dance in Senegal including Guillaume Siard from Preljocaj Ballet, Alioune Diagne from Cie Diagn'art in St Louis, Senegal, Germaine Acogny at Ecole des Sables, Gil Roman from the Ballet Bej'art, and actress Marie Koda, to name a few. In 2018, Baidy earned his diploma in the art of teaching dance and mastering traditional and contemporary African dance at Ecole Des Sables.
From 2015 – 2019, Baidy Ba toured Germany, the United States, Spain, and London with several companies including the production Political Bodies choreographed by Yolanda Guttiérrer, the Tenane Company in the DanceAfrica Festival at Brooklyn Academy of Music in 2016, the Festival Kaay fecc in 2017, and the Festival Cuadernos esceninos in Spain. In 2017 Baidy founded his own company, the Mbosse Dance Company, which brought him to France for a cultural exchange as part of the Nicola project, in London, England and Brazil. His first solo entitled Gouddi Ndakarou, was presented in TChad at the Souar Souar Festival at the Goethe Institute of Dakar, at the Blaise Senghor Cultural Center in Dakar and at the Ecole des Sables in Toubab Dialao. His second solo entitled Ilusion was presented in the Soloduo International Contemporary Dance Festival in Cologne in 2018.

Through his organization that helps the children of the Street, Kilifete Euleuk, in Kaolack, Baidy was invited to participate in a project, Un pas en Avant, in Tchad to work with the War Refugees for three months in 2019. Baidy performed with the music group Guiss Guiss Bou Bess in the Transmusical Festival in Rennes and participated in a 2 week residency in Lille. While in in Rennes, France another Sabar Fusion was organized in Athens, Greece for a seminary at the Quilombo Center. Baidy Ba is also the Founder/Director of the first 100% international Dance Festival in Kaolack in 2017 and presented the second festival in 2019. In Kaolack, Baidy created cultural training and exchange projects for local dancers.
Currently, Baidy is working on a Collective project with dancers from the Kaolack region, the Alliance Française de Kaolack, and dancer/choreographer Nicoletta Key From Italy to create a national tour of Senegal. Lastly, Baidy Bâ opened the first mixed dance center in Kaolack in collaboration with L'alliance Frances de Kaolack where he trained more than 50 young students and lovers of dance. Through his mentorship, 40 young dancers became professional, including 6 dancers who have graduated in teaching and writing dance.