Visions of a People Performances, June 20 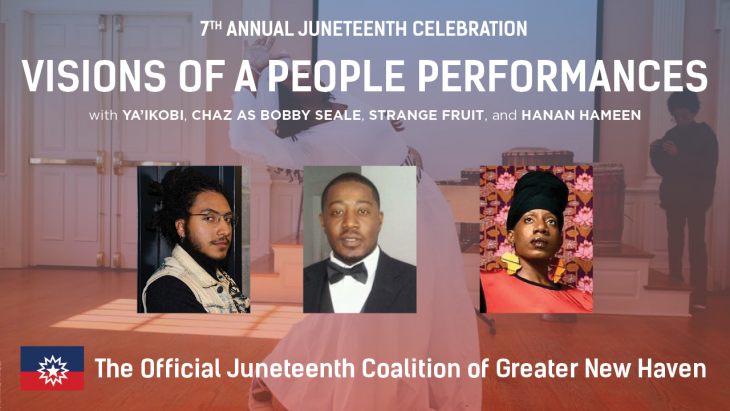 Join us for expressions of the visions of democracy, freedom, resilience, protest, and celebration by some of our instructors and New Haven artists using poetry, dance, and theatre through a historical reenactment of the Bobby Seale trial in acknowledgement of the 50th anniversary of the Black Panther Party.

A restaged solo of the original work by Mama Pearl Primus

Ms. Reina Pelle-Joseph is Bronx, NY based dancer and choreographer who began her studies at the tender age of 5 under the tutelage of Ms. Robin Williams and Ms. Hanan Hameen at the historic Uptown Dance Academy in Harlem, NYC. Ms. Pelle-Joseph quickly advanced in her disciplines of Ballet, Modern, African, Tap, Flamenco and Jazz, which enabled her to land her first professional role as Timoune in the Off-Broadway play “Once on This Island” just two years later. This was the start of a long and ever-budding journey in the arts. As a teen in her community, Reina developed a passion for the youth and began to share her love of dance with her younger peers as a teaching assist. While attending North Carolina A&T, Ms. Pelle-Joseph focused her energy on creative movement for children, and with years of experience in all facets of dance, is primed to perform her craft at the highest level both physically and as a dancer and academically as a seasoned dance teacher. She has also traveled to learn from and performing with numerous international artists and dancers to help her get back in tune with her culture and heritage. As an Artsucator-in-Training, Reina he then aided and assisted her mentor Ms. Hanan Hameen at Neighborhood Music School and Lincoln Bassett Elementary School in New Haven, CT as a lead teacher. Ms. Pelle-Joseoph was also integral in the development of dance programs at Teaching of Arts Horizons, the Boys and Girls Club, Pathways to Graduation, and many other Public and Private Schools around the TriState Area and has instructed at each. Currently, Ms. Pelle-Joseph is the Dance Captain for Artsucation Academy Network’s Keepers of the Culture Performing Arts Company. She hopes to continue pushing love art and education to her community then the rest of the world!

Harlem based artist, Mount Vernon native, SISTA ZOCK aka ZOCK SOLID Renaissance Woman (“artivist”, poet, song writer, actress, dancer, playwright) celebrates her musical debut this year on Academy Award winning Spike Lee’s “She’s Gotta Have It Season 2”. The song titled “YOU SHOULD KNOW THAT” off her debut album “ZOCK SOLID, Where the Stem Meets the Root” is currently being used as a trailer for the show in episode 203. The Netflix Series “She’s Gotta Have It Season 2”.
Sista Zock’s music straddles the fence between Spoken Word/Song and Jazz Hip-Hop and Jazz. She received a sturdy platform for her art at ST. NICKS PUB. Her performance can be intimate enough for a living room setting or can power up a small city with drumming, dancing and live models. Her body of work is dedicated to the Fallen Soldiers, the ones who have sacrificed their lives for the betterment of others, the Victims of senseless killings, to the ones who are ahead of their time and the ones whose time has yet to come. Her album is a testimony of the life of a “Black Girl” in America,. Sista Zock has the ability to mesh all of her talents into one performance. Zakiyyah has appeared on stage, film and TV. She is an ensemble member of Knoxville, Tennessee’s company The Carpetbag Theatre, Inc. It was in Tennessee where she met her mentor and dear friend Abiodun Oyewole of “The Last Poets”, who is featured on her recent album “ZOCK SOLID, Where the Stem Meets the Root”.

Ya’ikobi is an artist from Connecticut and a 4 year resident of New Haven. His music expresses his political ideals, social observations, and life experiences, and discusses spiritual themes and compassionate living. Ya’ikobi is also an avid agriculturist, student of African traditional and diasporic spirituality and a vegan. “Ya’ikobi” is a form of “Jacob” in the Ethiopian language Amharic.

Original Dance Choreography to Find Your Way Back by Beyonce

Sharon Dickey is a local dance artist born and raised in New Haven, CT. She is an exhibiting member of the ‘Keepers of the Culture Performing Arts Company’. Sharon has a passion for taking charge and making an impact in her community on all levels. She is a student at Gateway Community College and is acting president of the Black Student Association.

Original Dance Choreography to Find Your Way Back by Beyonce

Earl Ali-Randall, New Haven native, is an Arts &Ideas Fellowship Alumni and performed for the festival for the past 7 years. Mr. Ali-Randall worked for the Festival during the summer of 2014. Mr. Ali-Randall is an alumni from Albertus Magnus College with a BA in Early Childhood Pyschology/Education. Earl is a dancer for the ""Keepers of the Culture Performing Arts Company and teaching artist. Mr. Ali-Randall was trained at the Educational Center for the Arts and the Caldwell Dance Center in New Haven. As a budding professional dancer Earl later performed for Kwanzaa and other community events with Elder Elaine Peters for the past 5 years. Currently, Mr. Ali-Randall is an African dance instructor in New Haven for LEAP and Elite Sounds of the Arts teaching African Dance, Contemporary Modern, and Jazz. Lastly, Earl is an Educational Assistant for New Haven Public Schools.

Chaz Carmon is an Actor, Educator, Youth Advocate, Activist and the President of Ice The Beef Anti Gun Violence Org. in New Haven Ct. He has worked on 45 Tv Shows and 46 Movies like The Following,Blue Bloods, The Black List, The Other Woman, Chill Pill, Spider Man 2, Madame Secretary on CBS, Luke Cage Iron FIst and Dare Devil to name a few. His model is I am My Brothers Keeper.

Original Dance Choreography to 2020 Riots – How Many Times? By Trey Songz