With DJ That Dana Game and DJ Kaos the Main Event 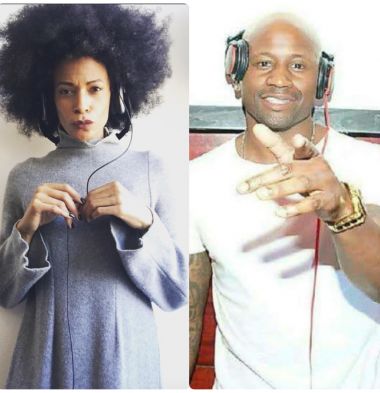 Juneteenth Celebration Dance Party featuring DJ That Dana Game and DJ Kaos the Main Event. Put on a nice outfit, join us on Zoom, and let's celebrate our emancipation to music from across the African diaspora.

DJ Dana Game is a professional DJ, working model, and advertising executive having worked at major ad agencies in New York City, and media companies including Time Inc. and Viacom. She has always been a lover of music and dancing since age 3, growing up on soulful disco and 80s hip hop influences that her parents played in their Bridgeport home. Dana began DJing as an adult after the internet bubble burst in 2001. Today, she plays music throughout the U.S., at clubs, hotels, galas and private events. Taking from her marketing and advertising work, she is her own boss, and brand manager--playing all music that is soulful.

DJ Kaos the Main Event – Live from NYC
Kaos continues to prove why he has been nicknamed THE MAIN EVENT. From being one of the most requested Open Format Club DJ’s in NYC, to holding Residency in Atlantic City’s “PROVIDENCE NIGHT CLUB” (Tropicana Hotel & Casino), Kaos has quickly become the preferred DJ for more than a few hollywood A-Listers also including the NY KNICKS, GIANTS, and NY JETS. Most recently Kaos joined forces with Hennessy to bring to life the Ultimate Nightlife experience campaign. Considered a “Chameleon” amongst his peers, DJ Kaos can be heard playing at just about any type of event, whether it calls for Open Format, Hip-Hop, EDM, Dirty House, R&B, Dance & Top 20. Kaos possesses the versatility and ability to get any crowd moving. Currently Kaos spins at 6 Clubs per week at minimum in NYC, and also travels to different venues around the country coupled with being featured at retail corporate events. Kaos has starred at a number of NYC’s Top Venues such as Marquee, Lavo, The Anthony, Gilded Lily, No8, Raven, Providence NYC, Griffin, Webster Hall, The Gansevoort Rooftop, 1OAK, Motivo, TAJ, Avenue, Suite 36, The 40/40, and Stage 48. Kaos also Dj'ed oversees in Africa, England, Paris, Jamaica, and recently finished touring 5 cities in Japan. DJ Kaos is now booked Nationwide as an “Open Format” DJ and can be heard at some of the nations biggest entertainment events such as NBA ALL-STAR Weekends, CIAA, Fashion week events, MTV VMA Award Weekends, Urban Fiesta Memorial Weekend in Puerto Rico, Carnival in Miami and many more.