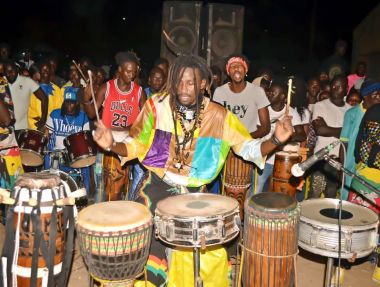 Sabar, a name created from the Serere language of Sine-Saloum (Kaolack-Senegal) was given to him by his ability to bring people together with each call of the drums. Previously, the Sabar being used as a means of communication to transmit a message from the King, to call for food, to communicate between the family and etc. .. and all of this qualifies as a dialogue. So the course of this Saturday will be on the first rhythm that we always play before opening the ceremonies where we play or others. so prepare your sticks and your drums because we will learn the history of Senegalese culture through these notes of Sabar.

Modou Diagne is a premier Sabar drummer and dancer in Kaolack, Senegal. Being born of a griot father who taught him how to play drums, Modou Diagne started playing drums at the age of 8 and displayed advanced artistic abilities in music. To improve and strengthen his music and dance skills, Modou traveled to the Gambia in 2002 to study. In 2009 Modou began to become known by the general public of Kaolack through his performances. Building on his success, Modou founded his own group, Thioumboukh Family, composed of drummers, singers and dancers in 2010. The group released two songs with Barri Bagages TITI a Senegalese international star singer. In 2015, building on his success, Modou was hired as a drummer at Prince Art label in partnership with the singer TITI. Together they performed on national and international tours, which included a duet with TITI on a song entitled BAYE ABDOU KARIM. Currently, working independently to continue to succeed, evolve, and create music at the forefront of the international scene. Modou is also teaching virtual Sabar drum classes through Artsucation Academy Network’s Online Diasporic Class Series.