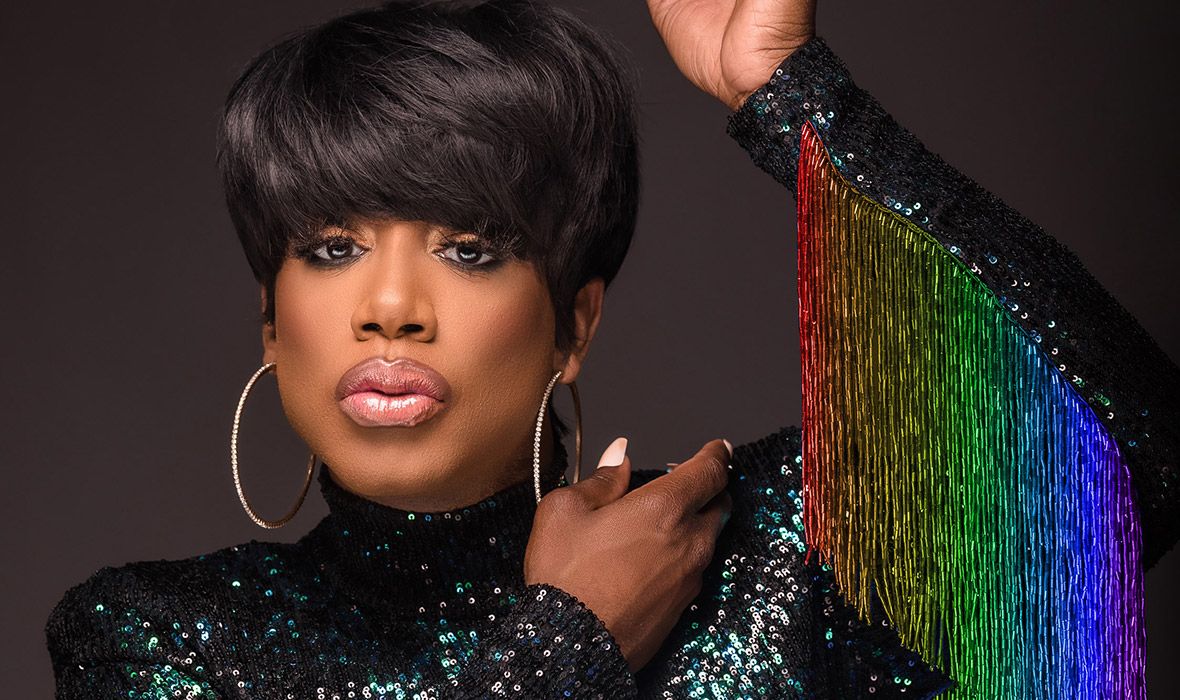 Drag royalty are descending on New Haven, ready to WORK this town into a fun-filled and informative tizzy. In this legendary mainstage event, drag performers and educators will display drag performance styles across the decades, with interludes touching on everything from Stonewall to a state of the union on LGBTQ+ and drag communities today. La’Diva Monet, nationally adored impersonator of R&B singer and American Idol winner Fantasia Barrino, will cap off this all-star affair. Bust out your Donna Summer best and get ready to travel through time in style.

LaDiva Monet is a celebrity impersonator from Atlanta, Ga. Although she has been doing female impersonation professionally for 8 years, her impersonation of American Idol FANTASIA BARRINO has become her trademark. As a well traveled entertainer, LaDiva has traveled and performed in cities such as Chicago, Washington DC, and St. Louis to name a few. After becoming a viral sensation in 2016, LaDiva joined SALUTE TO DIVAS a celebrity illusions showcase in Washington DC, where she is still a member. In hopes to build her fan base, LaDiva works diligently to bring her character to life, and gives 150% on stage. Throughout her travels, LaDiva is determined to follow her dreams and let NOTHING stand in the way of her DESTINY!

Sparkle (she/her) was created in May 2006 by Kishorn C Henry-Walker while residing in Baltimore, MD. Sparkle, or Sparky, as her friends call her, lives by the motto, “leave a little Sparkle everywhere you go”. Sparkle hails originally from St. Thomas, United States Virgin Islands. She has dabbled in the arts here and there but most of her performance art training took place during her childhood as a trained trombonist and her strong participation in steel pan ensembles. Her love for music and performing also came from her very active participation in Caribbean carnival events...something she often likes to call feteing! Sparkle’s first career as a Human Resources Management professional has required her to move a few times over the past few years. She has resided in cities such as Baltimore/Washington DC, Philadelphia, New York City, and New Haven. Over the years, Sparkle has held a few titles including the coveted Ms. East Coast International Newcomer, Ms. Leons, and Queen of Pride of Baltimore. This has afforded opportunities for her to perform her art in various venues along the east coast but always takes pride in Baltimore as her “drag home”. She has been casted in different venues such as Philadelphia’s oldest drag show at the legendary Bob and Barbara’s lounge, and the gone but not forgotten Hippo Bar in Baltimore, just to name a few. Sparkle currently resides in Bridgeport, CT with husband, Aharon, and family. She has performed in many venues in and around CT, and currently is a cast member of the Lipstick, Lashes and Lies drag show at Comix Roadhouse – Mohegan Sun Casino. In her spare time she enjoys gardening, sewing/costume-making, small home improvement projects, traveling, entertaining friends, cooking delicious meals and makeup artistry…just to name a few! Sparkle’s advice to the rest of the world is to always 1. Seek to understand, 2. LIVE, you may regret it later in life or you may not even live to tell the tale!

Kiki (she/her) is a New Haven, CT-based drag performance artist with a vast training and performance background that includes numerous disciplines: classical ballet, aerial acrobatics, music theatre, modern dance, and acting. She also has a strong background in theatre production, directing, and costume and production design, and producing as well. She regularly performs throughout Connecticut as well as appears at events in Massachusetts, Rhode Island, and New York. Some notable roles she has played includes Sarah Sanderson in Hocus Pocus Live (Summer Orlando Productions), Roxie Hart in Chicago (Summer Orlando Productions), and as a featured performer in 3 different productions of Escapade: An Unusual Experience (Luis Antonio Productions)! Prior to the pandemic, her show Let’s Have a Kiki had regular performances at Partners Café in New Haven, Trevi Lounge in Fairfield, and the Chez Est in Hartford. Let’s Have a Kiki features a variety of regional drag performers and burlesque artists and celebrated its 50th show in August 2019. She was also a cast member in Ladies of Illusion and a regular guest artist of the Robin Banks Show at 168 York Street Cafe in New Haven and Lipstick, Lashes and Lies at Comix Roadhouse, Mohegan Sun. When not performing, Kiki uses her experience as a non-profit and fundraising professional to raise awareness and funds for many LGBTQ+ organizations and causes, and serves as a member of the Imperial Sovereign Court of All Connecticut, Inc, where she hold the title of Monarch 20.

Tia (she/her) has been performing for over 30 years – taking on stages in Connecticut, New York, and Europe. Bubblicious, or Bubbles as her friends call her, was one of the founding queens of the New Haven drag scene and has performed in every LGBTQ+ venue throughout New Haven. As an visual artist Tia’s art tells stories. As an out and proud black transgender woman, Bubbles dedicates time and energy to bring awareness, support, and visibility to black and brown trans folk through performance and activism.

For over 30 years, the Connecticut Gay Men’s Chorus has served as a standard bearer for a powerful and accomplished mix of high-caliber performance, community activism, empowerment and inclusiveness, establishing it as an icon among Connecticut’s LGBT organizations. Founded in 1986, it was the first organization of its kind in the state and has been a proud member of the LGBT choral movement, which helped galvanize and change the course of LGBT history. Under the leadership of Artistic Director Greg McMahan, the CTGMC has in recent seasons established a heightened level of performance standards receiving audience and critical acclaim, increased its profile, and broadened its impact and reputation in the community while maintaining its signature blend of humor, personality and high-voltage performances.

The CTGMC is unique in that it is both a choral arts organization and a social change agent. The chorus performs at, as well as supports, an ever-increasing number of community outreach organizations to raise funds and awareness of social and LGBT programs. We aim to portray the very best of the gay community in an authentic way. And, to further our mission of building bridges between the gay community and the community at large, we now welcome men of all orientations to join us in song and fellowship. The CTGMC is a member of the New Haven Arts Council and the Shoreline Arts Alliance and is proud to be an active member of GALA, the Gay and Lesbian Association of Choruses.